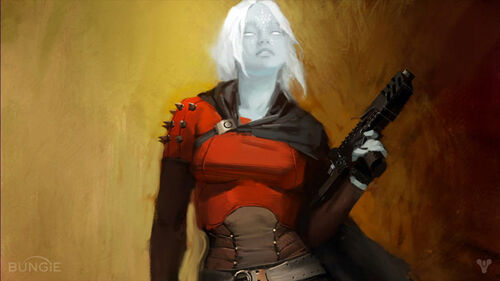 The Awoken are a playable race within Destiny, and one of the three races of Guardians.

The Awoken were spawned during the assault on the Traveler by The Darkness. After The Darkness launched its massive attack, humanity surged away from the destruction and desolation. Some were saved, able to escape the tide of death, while others were destroyed in mere seconds; still others were able to escape The Darkness, but only just. Those who were able to escape but were still affected by The Darkness became the Awoken. Their skin turned pale and their irises bleached white by the pure darkness of nothingness, some of the Awoken migrated towards Earth after the Collapse, leaving their brethren at the edge of the ruins of war. Upon appearing on Earth, they quickly joined the Humans and the Exo in building the City and the Tower, ascending to the role of Guardian.

No one is completely sure why and how the Awoken transformed the way they did.

Exploratory video on the Awoken's point of origin: Destiny - Secrets of the Awoken