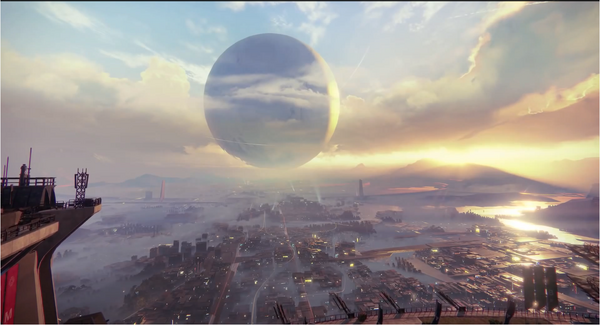 The City is the last bastion of humanity on Earth.

"In our darkest days, Humans, Exos, and Awoken found the Traveler where it made its last stand, low above Earth, silent and immobile. We built this City – our last – within its protective Shield, fighting countless wars to keep its peace. From that dark age, the Guardians of the City were born."

The City is the last great population center on Earth. Immediately following the Collapse of the Golden Age of Humanity, the City was constructed, utilizing the shadow of the Traveler for protection. Here, the last Human, Exo, and Awoken survivors have congregated, protected by the Guardians from their Tower. Though the Guardians are given powers by the Traveler overhead, The Darkness is constantly pushing in. According to many atop the Tower, what stories were first told to frighten children about the fall of the City and the rise of the Darkness have stopped being told - not because they are no longer horrifying, but because they are finally coming true.

Though the Traveler hovering overhead is a stern reminder of human mortality and the plight of the Earth, the Guardians are still searching for a way to bring the Traveler back, to finally sprawl out of the City, and to defeat the Darkness once and for all.