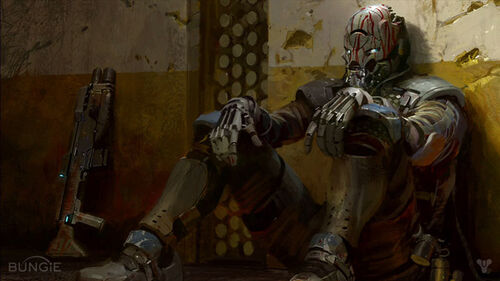 The Exo are a playable race in Destiny, and were created for unknown purposes during the great Golden Age,

The Exo race was created during the great Golden Age of humanity. Originally created as machines of war to combat The Darkness, their memories were wiped and they were reprogrammed following the Collapse to unify humanity, ridding them of any societal or militarist divisions. Exos are considered to be extremely advanced, with only the Ghosts capable of understanding their inner functions, protocols, and programming. Within the City, the Exo are equals to the humans, and are considered brothers and sisters. Many have chosen to fight against the Darkness, and as such have received the blessing of the Traveler in the form of guardianship, suggesting that the power granted by the Traveler is not organic in nature.