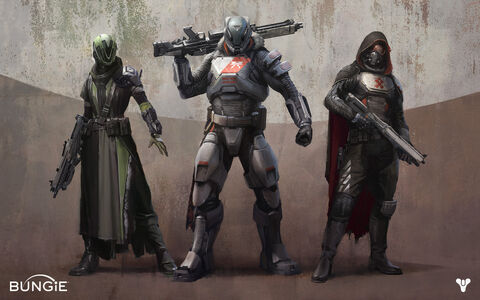 The Guardians are the protectors of mankind in Destiny, empowered by The Traveler to continue the war against The Darkness.

"If you can find a way to save the city, to reclaim all that we have lost, you will become legend. If you fail, the last light of civilization will go out." -- The Mask

As the Traveler sacrificed itself for humanity, it made two final acts in its last dying breaths - the creation of the Ghosts and the empowerment of the Guardians. The Guardians are the player characters of Destiny, empowered by the Traveler to wage war against The Darkness in all its forms. After the Collapse of Humanity's Golden Age, the Guardians were left as the sole defenders of Earth. Following the Speaker from atop the Tower in the last vestiges of humanity known as The City, the Guardians are divided into three class.

Classes of the Guardians

Official Description: "You are a Guardian of the last safe city on Earth, able to wield some of the Traveler's incredible power. You are taking this mantle just as a new day dawns. Titans, Hunters, and Warlocks have finally returned to our long-lost worlds, only to find out we are not alone."

The Guardians are divided into three general classes. The Hunters are a reconnaissance-based class based on the classic bounty hunter. They utilize quick but less deadly attacks to neutralize their prey, focusing on operating from the shadows more than direct combat. Warlocks combine their special powers with their weapons, making them the sci-fi equivalent of the wizard/mage class in fantasy games. Finally, Titans favor heavy weapons and melee attacks, and can be considered the traditional "super soldier".

The guardians can meet up in a variety of ways such as: Arenas, Strikes, Raids, Ambient Encounters, and Public Events. It has been suggested that players will use simple Gestures in order to form fireteams and initiate conversations in these areas.

The Guardians are loosely organized into sets of impromptu fireteams. They follow a grand overall plan as laid out by the Speaker, who is the liaison of the now dormant Traveler. Another important personality to the Guardians is the Mask, a figure whose quotations appear in official promotional spots and in-game content.

Guardians will have levels ranging from one to at least twenty. Each player may have multiple Guardians in different character slots. No matter what class is chosen, each character will also have an exchangeable focus which may be equipped to act as a sub-discipline to further customize a player's experience. A newly created Guardian may have their gender, face, hair, and tattoos customized.

It is currently unknown what effect levels and gear will have on the basic stats of the player Guardian, though an image showing an early version of the 'Destiny App' for smartphones can be used to indicate the level of customization players will be able to enjoy as they level up their characters.

The 3 classes are all inspired from different characters. Characters like Han Solo from Star Wars and Clint Eastwood's western films were the inspiration for the Hunter class. Warlocks are influenced by the Jedi-Knights, Gandalf from The Lord of the Rings and Morpheus from The Matrix. Bungie's very own Master Chief was one of the inspirations for the Titan class.